When the torrential rains began last week, I didn’t complain. People who live here never complain about rain. Half the time our state is either on fire or in a drought. Besides, every Colorado rainstorm blows over after a few hours. That’s just how it is.

But last Monday, it rained the entire day. And the day after that. But still, no complaints. Just a few jokes about misdirected Seattle weather.

It continued to pour all day Wednesday. Not quite so funny anymore. On Thursday, the phone rang just before six in the morning, startling us awake. Boulder Valley School district had cancelled school for fear of flash flooding. Darrick and I were incredulous. Snow days are common around here, but canceling school for rain? It seemed ridiculous.

Minutes later, this happened a mile from our house.

Rain of biblical proportions continued to fall. More than seventeen inches in Boulder this past week. Boulder’s average precipitation is only twenty inches in an entire year. I read the statistics, unable to wrap my head around the fact that we remain untouched (knock on forty-seven pieces of wood), when just thirteen miles away, Boulder has been brought to its knees. More evacuations have taken place from what some are calling the “Thousand Year Flood” than any other disaster in this country since Hurricane Katrina. Hundreds unaccounted for. Eight deaths. 1,500 homes destroyed and over 18,000 damaged. 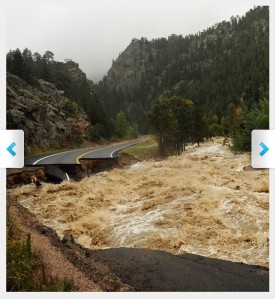 There’s a disconnect for me because so far, I’ve only seen pictures of the devastation just miles away, in places I love like Boulder and Estes Park. We’ve only been served a wee, little tapas plate of minor inconvenience. Soccer was cancelled, along with four days of school. My beloved trail is a washed out mess, but easily fixed. It’s hard to fathom all the destruction, when this morning the sun is shining in a cloudless, wide open blue sky. It’s a normal, sunny Colorado day. But for thousands of Coloradans, normal is a thing of the past.

If you can help, here are some great organizations:

A blog about books, music, nature, quirk, and a hopeful writer’s journey to publication.