Sometimes, on the trail, stories wrench their way out of my memory and demand attention, even if I’d prefer to keep them tucked away. This is one of them. 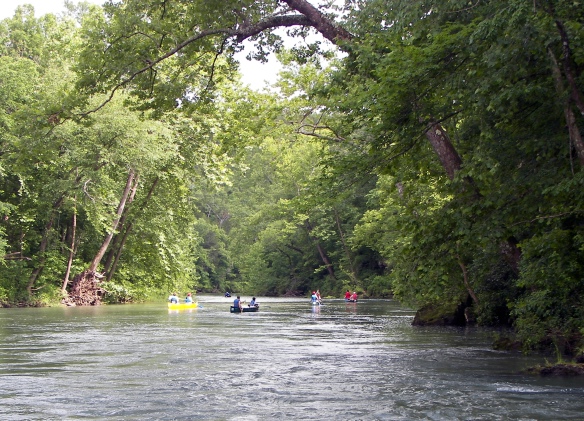 Several years ago, I was faced with having to say goodbye to a group of friends who had become like brothers and sisters during our year spent traveling with Up with People. The only consolation was that after everyone departed for their own corner of the globe, four of us would embark on a canoe trip through the Ozark Mountains on the Current River.

The memory of that canoe trip, with three of my favorite people on the planet, has crystallized over the years with images as vivid and sharp as if it happened yesterday. Old growth forests, dense and impassible. A lush, green canopy of oak. The earthy, musky scent of a slow moving river. Just the four of us, two canoes, and the knowledge that the end of our time together was imminent. Gaby would return to Mexico, Jussi to Finland, Mark would stay in Missouri, and I’d go home to Montana. But we still had two whole days and a glorious stretch of water before us.

We couldn’t believe our good fortune to have the river to ourselves. With no sign of the outside world, no responsibilities or jobs to return to, we were truly free. Time seemed to stop as we basked in the sun and each other’s company; swimming, climbing white bluffs, and jumping into deep pools. We found a sandbar, smack in the middle of the river, and set up camp for the night, only to unroll the tent and watch it practically disintegrate before our eyes. It had rotted since it’s last use, and we laughed ourselves silly, knowing that we’d be warm enough under the blanket of stars.

As we sat around the fire that night, Mark drug out an ancient bottle of wine that had been a wedding gift to his parents twenty-five years ago. It was a screw-top, something “fancy” like Ernest and Julio Gallo and his mother warned us that the wine was probably undrinkable by now. We didn’t care. We were young and broke and a free gallon of wine sounded pretty good to us. Mark said he’d buy another bottle when he got home, and we made a vow, that no matter what happened, the four of us would share it at our cast’s twenty-five year reunion. No spouses, no children, just the four of us.

We couldn’t have known, that night on the sandbar, that we’d lose our dear Gaby to cancer nine years later. If we’d had any idea of what the future would bring, I’m certain the next day would have been different.

The next morning brought hundreds of canoes carrying strangers who defiled our sanctuary with their laughter and shouting. I wanted our river back. I wanted the peace and serenity and that feeling like it existed only for us. We thought if we could just get ahead of this large group, it would go back to how it was before. So we paddled furiously. As we passed canoes, I felt strong, in control. We kept on, our oars slicing through the water in unison, determined to beat the throng and find our own place again. Soon, there were only a few canoes ahead of us. I remember smiling, the sense of accomplishment, when we’d passed them all.

And then, the sinking feeling of realizing we’d already reached the pull out, the end of our trip. I’d thought we had miles to go still, but our canoe trip – the one we’d anticipated for months – was over. Instead of paddling like banshees to pass all those canoes, why hadn’t we waited? Instead of rushing through those last miles, we should have savored them. I think I even turned our canoe around and tried to paddle upstream, desperate to hang on, just a while longer.

But that’s how life is, and sometimes, my angel Gaby reminds me of it. Slow down, she seems to say, as I row, row, row my boat, trying to stay on top of a never ending to-do list. This is your life.

My daughter turns seven today. She’ll never be as young as she is right now. I’ll never be as young as I am right now. Sometimes, if we let them, our regrets turn into gifts, in their sneaky, painful ways. I’m not making any promises, but I’m really going to try to stop paddling so fast. I can’t make the river stop, but hopefully, I’ve got a big, rambling stretch of it in front of me. Who cares if it’s not perfect, if it’s too crowded with canoes or a sticky floor that needs to be mopped. I’m going to savor the ride.

9 thoughts on “Lessons from the Current River”