Back when I worked for Up with People, I spent a month in Gettysburg, PA.  I questioned this assignment, since Gettysburg is known as the most haunted city in America and I am known as the biggest chicken pot pie in America. In Gettysburg, it seemed like everyone either had a ghost in their house or knew someone who did. No big whoop. Even our sponsor, an influential business owner, talked about his daughter who used a Ouija board at Devil’s Den, the site of one of the bloodiest battles of the Civil War. According to him, the ghost of a soldier “followed” her home and took up residency in his house. He and his wife sometimes saw him standing next to their bed at night. At this point in the conversation, my teeth had practically chattered right out of my mouth and I was wishing I’d been assigned to Des Moines.

Fortunately, I stayed in one of the few allegedly ghost-free homes in Gettysburg, but I wasn’t taking any chances. I didn’t drink anything after 7 pm, so I wouldn’t risk running into any wayward souls en route to the loo in the middle of the night. My inner six-year old came out at bedtime, and when I turned out my light, I’d take a flying leap into my bed, squeezing my eyes shut and not opening them until morning.

While my hyperactive imagination called the shots at night, I was much braver in the light of day. As often as I could, I went running on the trails that crossed the battlefields, drinking in the landscape steeped in so much history. Often, I was alone on the tranquil paths. Dense 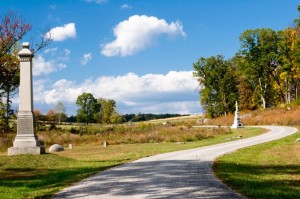 trees, lush grass and the first flowers of spring created a park-like atmosphere, but then I’d stumble across a moss covered statue of a Civil war soldier, a stark reminder that more than a century ago, nearly 50,000 men lost their lives during the three-day blood bath on those very fields.

Maybe it was the power of suggestion, but I felt something there on those battlefields. A quiet energy, unlike any other place I’ve visited. For anyone who has experienced Gettysburg, you probably know what I mean.

During my four weeks in Gettysburg, I never saw one sign of the supernatural. Not on the trail, not in our office, which of course was in a haunted bank, and not in my room at night. But maybe that’s because I never really opened my eyes.

The video below is one of my favorites. While this car ad wasn’t filmed in Gettysburg, there is footage of what appears to be a ghost, but you have to watch carefully. Enjoy and Happy Halloween!

4 thoughts on “On the Trail of Gettysburg Ghosts”